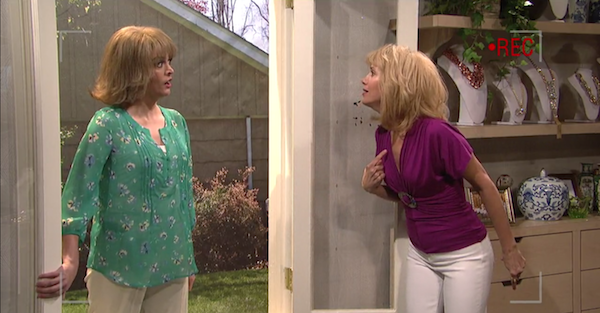 Sometimes you just gotta hand it to what you know. And what I know, is that Kristen Wiig is the most amazing of all.

Those who know me well know how much idolize Kristen and her abilities. Her characters and voices. Her silliness. Her smarts.

I’ve seen Bridesmaids more than I can even begin to count. I’ve lost track. (Sorry, I’m a fast moving Millennial and I will not be stopped!) In fact, at times I was watching the movie almost continuously. As in, I had the movie downloaded to my phone, tablet and laptop, as well as on blu-ray and DVD. I would watch it at home, waiting for class, at the gym, at the airport… I couldn’t get enough! Slash it was during a time when wireless passwords weren’t as loosey goosey at public places. And Netflix streaming wasn’t quite up to par! But, hold up. IT’S MY FAVORITE MOVIE.

Anyway, last weekend Kristen hosted SNL for the second time. The last time she hosted was in 2013, two years after Bridesmaids came out. And something occurred to me as I sat there and laughed and smiled throughout each sketch.

I’m smiling. No teeth, full force smile. From something I love.

It was good. I mean, I get smiles every day from my dogs, and of course, my Joshy. But, I needed those smiles from Kristen. They were long overdue smiles that I was craving like a chip and dip. I’ve realized, lately, how much I’m using my energy on things that really aren’t making an impact. It might be work, it might be people. It might also be me not doing enough. As my mom always says, “Use your energy for good” and “Don’t waste your energy.”  Amy Poehler could not have said it better:  “I am tired of being tired and talking about how tired I am.” I feel you, girl.

Anyway, watching the SNL cast interact with Kristen is a true delight (the opposite of a crap, for my UX web people out there, wink wink). I could watch Cecily and Kristen argue in southern accents every week. Let’s just make that a recurring QVC sketch, ok? “On QVC on QVC!”

If you’re wasting your energy, get more of whatever is your delight. For me, that’s some Wiig.