Make your own box: Power of Story 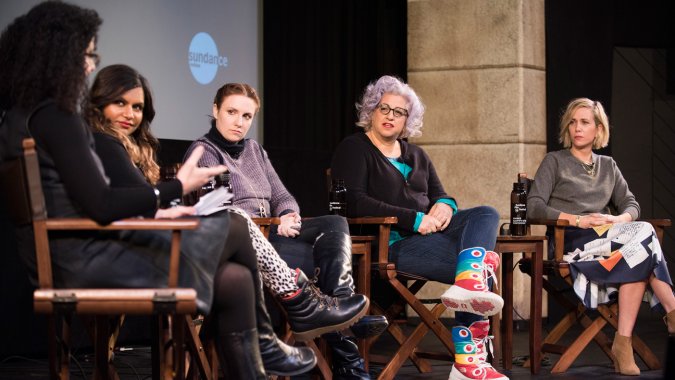 At the Sundance film festival this year, there was a fantastic roundtable featuring four comedic trailblazing geniuses. Four people that have minds capable of absolutely amazing creativity and storytelling artistry.

And that is a consistent slam-dunk in my playbook.

(The video is embedded at the end of this post.)

So essentially, a powerhouse lineup ready to answer all sorts of questions about what they do! Really, so good.

Right away, these serious ladies of comedy get into talking about their identities as writers and performers, and how gender complicates how people view their work. Because you know, they’re women.

It’s a double standard that’s not new, but the insights and key experiences you glean from listening to this whole conversation will shape how you approach storytelling and the subject at hand.

Lena starts off by saying, “Talking about being female isn’t in and of itself problematic. Identity is part of what all of us do. But there is a lazy set of questions presented to you by journalists…” She then gets into how journalists typically have a roster of questions for female entertainers, and how she sees that as lazy.

And it really is. Because women really do get those questions that always plug an identifier with the subject. Like in this case writing for a male character or producing a female comedy.

Take Bridesmaids, one of the very best movies on this earth. Kristen Wiig co-wrote and starred in the movie. And it’s usually described as a female comedy. I admit I have referenced the movie that way before. But Kristen mentions that when people talk about other comedies that have men in them, you never hear the identifier of “male comedy.” You just don’t.

As I think about how this double standard transcends to the general working world, I find it relating to women who hold jobs and families getting asked the favorite question of all time: “How do you do it all?”

If I’m ever asked that question, my response shall be: “You know, I just don’t know! Every morning I think about how I’ll divide up my brainpower. Because as a woman, I only have so much to divvy up. Then I down a small coffee, pack in some protein, and begin my day! Ha ha ha. Ok, next question?”

A key takeaway comes from Jenji Kohan early on in the panel. Male or female, it shouldn’t be about gender when you pick your team. She says, “You want to work with whoever is the best at what they’re doing…It would be a bummer to limit yourself.”

Comedy writing has its challenges

Putting aside the fact that the panel does consist of all women, towards the end of the discussion, they talk about the challenge of comedy writing. I really like the takeaways Kristen presents.

She brings up the fact that you can’t please everyone with your comedy writing. With comedy you have two perspectives: your own voice and the audience. Rarely is it as effortless as it seems.

“In being creative, pleasing the audience shouldn’t be your number one goal… No one has your voice.”

Storytelling is an art. And that goes for any kind of storytelling, whether it’s for the laughs or for the raised eyebrows. When you create your own voice, people will respond to your new way of thinking. Don’t try to fit into a box that’s already there. “Make your own box” as Kristen says.