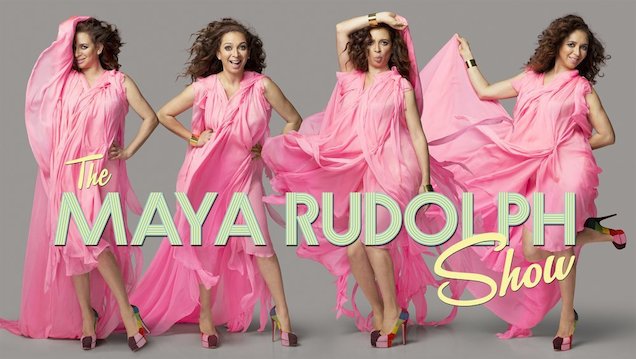 Monday, May 19, 2014, The Maya Rudolph Show premiered on NBC. Of course, critics were indeed very critical of every component of the show, being that it had a lot to live up to from variety shows back in the 70s. Ratings weren’t as great as they could have been, so the question remains whether a variety show is what us Americans really want these days.

The show captured the corny song and dance numbers, slipped in some funny (and raunchy) jokes, and did what any variety show is meant to do: entertain the audience.

Now I can’t say I am a variety show expert. That was all a bit before my time. However, I understand the variety show flow – and how it’s surely challenging to keep the audience laughing throughout the entire hour.

That’s why Rudolph leading the pack is smart.

Rudolph brings to the variety show years of entertaining experience from her days on SNL. She can sing, dance and improvise. Sean Hayes, Andy Samberg and Fred Armisen joined her on stage—three amigos I was very happy to see. I loved the SNL-esque sketches. I would definitely watch the show just to feel like I’m getting a second dose of SNL on a weekday before 10:30 pm CST. And if you’re a fan of Hayes, then this was having your cake, eating it, and licking the plate.

And don’t forget about Kristen Bell. She delighted us with her voice in a musical number about a sequel for Frozen. Bell was also in a sketch where Rudolph and Armisen had voices like GPS systems. This was perfect.

The Maya Rudolph Show has its work cut out for it. The demo watching this type of programming today likely didn’t get a lot of exposure to variety shows back in the day (me included). There hasn’t been a true variety show success in many years, however plenty of attempts (Wayne Brady, Nick Lachey and Jessica Simpson, and the Osbournes come to mind). And when you put Rudolph, Hayes, Samberg and Armisen together, the bar for funny gets set really high.

But I do think this could work. Jimmy Fallon has been living it up in the late evenings for years now, and in some ways his show is just like a variety show. It’s always featuring goofy sketches and musical numbers. Hollywood Game Night is also just a fun program, where celebrities get together to play games and make us laugh. Being outrageously silly is becoming the new norm of sketch comedy. All on NBC.

I say, let Rudolph find her focus. Let’s get another episode scheduled. I need more. Just imagine what we’re going to get when Kristen Wiig sashays in…