Yes Please—thank you very much 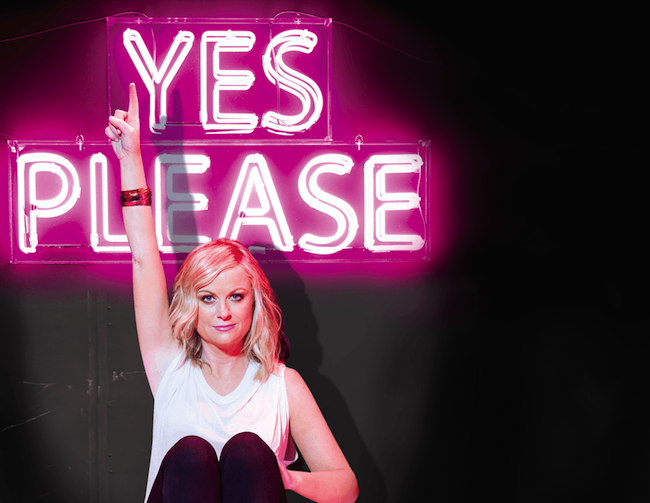 When I heard Yes Please by Amy Poehler was in production, it was a soft “ahhhhh” from the heavens. Bright lights and golden rocking chairs. A book from this beautiful, talented starfish meant more to me than you’ll ever know.

Remember when Tina Fey’s Bossypants made its debut? That was equally monumental. Basically, we all need to remember how #blessed we are to read the writing of such comedy GODS.

If you haven’t read it, go buy it immediately. You have one day.

You learn a lot about Poehler in this book. First off, you learn that she really found writing the book difficult. She wrote emails titled “How Dare You” and “Why Are You Trying To Kill Me?” to her editors.

There is a chapter where Poehler questions whether or not enough people hate her. I’ve never come across anyone asking this question, simply because most people don’t go that angle to judge themselves. And then you have to ponder, why would a person like Amy Poehler ever wonder that?

Even though it’s such an absurd question to ask herself, I think the fact that Poehler actually wonders it makes her an even more likable person. She is extremely transparent with herself. It puts the reader at ease while enjoying this book. If you’re not already a Parks and Recreation or Saturday Night Live fan, reading this book and getting to know Poehler should help you take the easy plunge into those satisfying comedy waters.

She notes her faults and times that she has screwed up in life. The book isn’t just about her achievements. It’s not about bringing to light all the good things she has done in life. Poehler has done a lot of good (and you would know that if you called once in a while). In fact, her achievements are sub-points to her tell-all.

Poehler shares moments from her life that make her incredibly vulnerable. I bet you’ll read a few and want to say, “Yup, that happened to me.” Or, “Holy cow, I did that too! I was really dumb!” It’s those little flaws that deepen the connection with Poehler, and for me, confirm that she is not an overly hated person. And if you hate her, really think about your life choices.

The book is divided into three sections: “Say Whatever You Want,” “Do Whatever You Like,” and “Be Whoever You Are.” Poehler offers her experienced advice on many topics offering many self-help tidbits.

Reading a tell-all style book lets chickens like you and me find similarities with a celebrity. I found a few things in common with Poehler, one of which is being a poor sleeper. Who really can shut off their mind at night, fall asleep, and stay asleep? Who? Who? Owls?

One last thing I love about Poehler is how she speaks of others she works with. There is no better way to put it other than saying she is just a really good person. Seth Meyers writes a chapter of the book. Learning about his relationship with Poehler, along with Fey, was so neat. They all have roots deep in improv. And did you know Poehler dated Matt Bessar? So many goodies!

Hit the line right at the bottom!

You need to read this book as a rite of passage. It has pictures, too.